Welcome to the Clarks Cheese Blog

Welcome to our blog! The place that you will find everything we want to share about cheese: Pictures, descriptions, new products, etc. I hope you will enjoy looking through the blog as much as we enjoy running it.

For our online retail store: clarksfoodsonline.co.uk 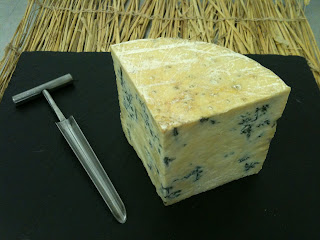 Oggscastle blue a the latest cheese to hail from the creative mind of cheesemaker Selina Cairns from H. J. Errington Co.
Named after the place were she grew up, Oggscastle is a based initialy on a Dunsyre blue recipe (raw cow's milk) with one major change: traditional rennet.
We have just received her first batch, which is just 8 weeks old. the taste is salty but pleasant, already quite strong but not overpowering.
It would be un-fair to compare taste against a Dunsyre as Oggscastle hasn't reach the same maturity yet. we'll keep posted!
Posted by The Cheese Blog at 08:25

the fantastic Eden worked her socks off to produce this map. Of course it is available to all our customers on request. 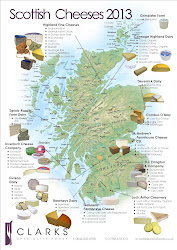 we are now stocking an organic British Ricotta from pasteurized sheeps'milk and pasteurized Mediterranean style (like Feta) from organic sheeps' milk. Both are suitable for vegetarians.

One to talk about!